Glutathione S-transferases and UDP-glycosyltransferases Are Involved in Response to Aluminum Stress in Flax. 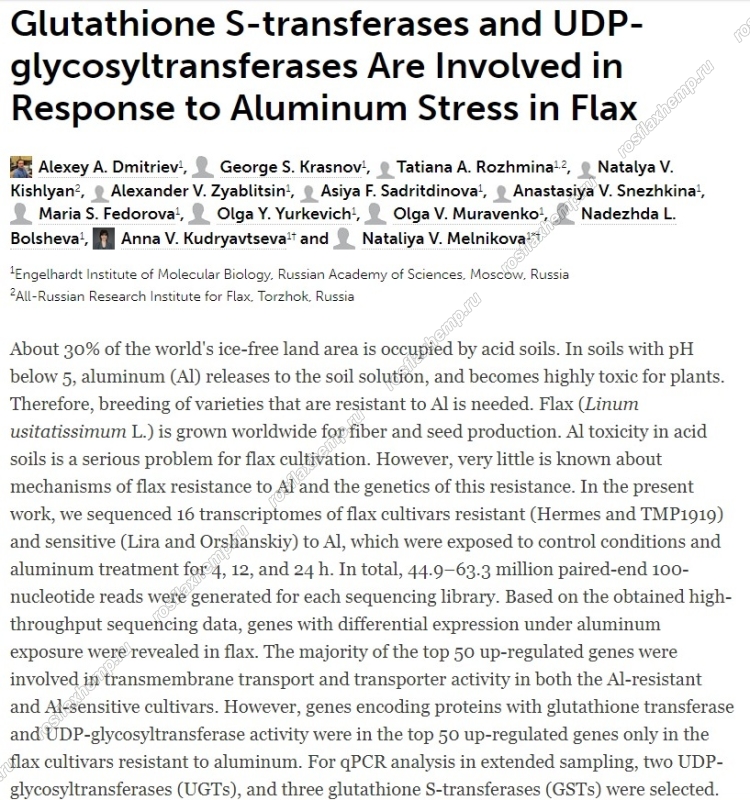 About 30% of the world's ice-free land area is occupied by acid soils. In soils with pH below 5, aluminum (Al) releases to the soil solution, and becomes highly toxic for plants. Therefore, breeding of varieties that are resistant to Al is needed. Flax (Linum usitatissimum L.) is grown worldwide for fiber and seed production. Al toxicity in acid soils is a serious problem for flax cultivation. However, very little is known about mechanisms of flax resistance to Al and the genetics of this resistance. In the present work, we sequenced 16 transcriptomes of flax cultivars resistant (Hermes and TMP1919) and sensitive (Lira and Orshanskiy) to Al, which were exposed to control conditions and aluminum treatment for 4, 12, and 24 h. In total, 44.9–63.3 million paired-end 100-nucleotide reads were generated for each sequencing library.

Based on the obtained high-throughput sequencing data, genes with differential expression under aluminum exposure were revealed in flax. The majority of the top 50 up-regulated genes were involved in transmembrane transport and transporter activity in both the Al-resistant and Al-sensitive cultivars. However, genes encoding proteins with glutathione transferase and UDP-glycosyltransferase activity were in the top 50 up-regulated genes only in the flax cultivars resistant to aluminum. For qPCR analysis in extended sampling, two UDP-glycosyltransferases (UGTs), and three glutathione S-transferases (GSTs) were selected. The general trend of alterations in the expression of the examined genes was the up-regulation under Al stress, especially after 4 h of Al exposure. Moreover, in the flax cultivars resistant to aluminum, the increase in expression was more pronounced than that in the sensitive cultivars. We speculate that the defense against the Al toxicity viaGST antioxidant activity is the probable mechanism of the response of flax plants to aluminum stress. We also suggest that UGTs could be involved in cell wall modification and protection from reactive oxygen species (ROS) in response to Al stress in L. usitatissimum. Thus, GSTs and UGTs, probably, play an important role in the response of flax to Al via detoxification of ROS and cell wall modification.

We identified genes with differential expression under Al exposure in flax plants using high-throughput sequencing and qPCR analysis. We observed increase in the expression of glutathione S-transferase and UDP-glycosyltransferase genes under Al stress. Moreover, the up-regulation of these genes was more pronounced in flax cultivars resistant to Al. However, we did not notice any increase in the expression of aluminum-activated malate transporters, which are involved in one of the most studied mechanisms of plant Al avoidance—the root exudation of organic acid to chelate Al3+. We speculate that GSTs and UGTs are involved in the response of flax to Al stress and suggest that the probable mechanisms for the resistance of flax to aluminum are detoxification of ROS and cell wall modification via GSTs and UGTs.